Automation: No substitute for Experience

The Asiana crash demonstrates that the easiest approach (usually visual approaches are considered to be less complicated than instrument approaches) isn't quite what it appears to be and is more complex than first meets the eye.

I was a manual pilot turned auto by moving to an automated airplane 10 years ago.  I spent time trying to figure out how to fly that manual approach into SFO using all that automation I’d learned to use, but I couldn't do it…it still required a lot of manual input and forethought.

In the case of the Asiana crash, we have a pilot trained mostly on automation now needing to switch to his manual skills, and probably recognizing this fact at the last moment.  This approach appears easy, but in reality it’s quite demanding and requires careful attention to many details, particularly the relationship between power and pitch in large swept wing jet aircraft. That is, when you decrease the power to idle, the airplane descends very rapidly and you need to increase the power BEFORE you think you need it in order to level off or decrease your descent rate.

Having flown this approach many times, I spent many hours trying to figure out how to fly it using the automation, since I was supposed to be using those modes as much as possible. It took me several visits to SFO, flying this same approach over and over, each time a little differently, to determine that I’d need to pay extra careful attention while descending on the final approach segment.  It took a good deal of experience to realize that the approach couldn't be flown in the auto mode…the airplane just wouldn't do it smoothly and quickly enough to be viable.

One of the greatest traps is thinking that since the approach is a “visual” one, it’s going to be relatively simple.  When you’re tired and hoping for a simple ending to the hours of endurance aloft, it’s easy to overlook or ignore the fine details of this approach that happen very quickly as you near the runway. Namely, finding yourself quite high when you’re quite close to the runway and needing to do something about it promptly, not wait for the airplane’s automation to fix the problem.

Changing from steady state flight to descent takes time and that means miles. If you don’t start descent at the very precise moment it’s allowed, you end up being higher and higher than you should be, requiring more and more skill to get the airplane down to the proper approach slope.  Not only do you have to know when to start down (and how steep to  make the descent) but you need to know when to arrest that descent so you can regain that desired 3 degree path to the runway.  All this data needs to be considered long before you begin the approach so that you’ll be ready and have the airplane properly slowed and configured for that last minute rapid descent rate to the runway. 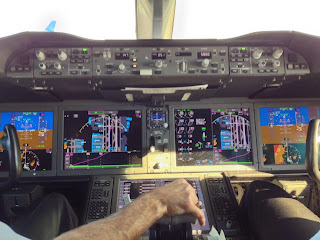 I've found it’s important to be skeptical of any seemingly easy maneuver.  At SFO, I would continually ask myself WHY there was no automated visual approach to Runway 28L, while Runway 28R has a very precise automated approach path that utilized a curving flight path and a normal descent rate.  But 28L is another story; the only automation I found useful was the basic wing-leveler and heading select mode of the autopilot and then it was iffy at best.  Mostly I’d disconnect the autopilot and use the visual slope indicator (VASI) next to the runway threshold to judge my descent for the last portion of the approach.

As they've said for so many years:  Aviation, like the sea, is terribly unforgiving of any carelessness, incapacity or neglect.  This appears to have been a case of several of these factors joining forces at just the wrong time.
Posted by Captain Karen Kahn at 7:57 PM 0 comments

Automation: Use it appropriately

The buzz this week is a report stating that the FAA finds pilot’s manual flying skills may be rusty due to excessive reliance on automation.  Although I can agree with some of their findings, I’m more concerned about the issue of when to use which mode?  I think the bigger problem with automation is when to turn it off and fly manually?  Or, just as important, when should you turn on the automation and let it do the work the system was designed to do?

So how detrimental is our generation of automated airplanes (or better said, the automated pilots) to themselves and the traveling public?  When should we, as pilots, switch from automatic to manual flight…or vice versa?  That’s the real question.  The appropriate use of the technology and deciding when it’s best to use one mode or the other can be tricky, especially when you've been trained to use all of the newest automated features.

I consider myself an inter-generational or semi-automatic pilot.  I was raised on manual flying, but taught to use the autopilot to help me do my job.  About 10 years ago I transitioned to the Boeing 757/767 which has the advanced automation features (lateral and vertical navigation integrated with the autopilot) which now concerns the FAA. It’s easy to flip switches, but the real concern is knowing when to take over and use our manual piloting skills, honed through years of experience, to do what the automation seems reluctant to do, won’t do, or can’t do quickly enough. 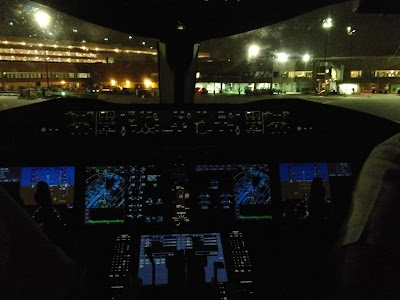 Automation works extremely well to relieve heavy and ongoing workload situations which require constant monitoring of multiple inputs.  Automation is designed to fly the airplane smoothly and change modes with the least amount of fright-inducing pitch/power changes.  I recall doing my simulator training on go-arounds/missed approaches one afternoon, then riding on the real airplane later that evening which had to do a go-around for real. As a passenger, I was impressed with how smoothly the plane transitioned from descending flight on the approach to adding power smoothly, transitioning to a climb on the pull-up to complete the go-around or escape-the-ground maneuver.  The automation did a great job which ensured safety and passenger comfort.
The issues of when to implement, and how to best utilize automation has always been a concern.  I recall flying the mostly manual MD80 from 1988 to 2003 and hearing lots of stories about the problems with “automation obsession” which could easily distract a pilot from that most important of all jobs, flying the airplane.  “Click it all off” they told the pilots flying automated airplanes. If it’s not doing what it needs to do below 10,000 feet, you need to have your head up and looking around, not buried in the button-pushing process of trying to make the Flight Management Computer (FMC) do its thing.

Several other questions come to my mind as a transitional pilot, given my inbred suspicion of too much automation:

Do younger pilots, trained with more video games and simulators have a tendency to use it more or perhaps too much?  Do they use it when it's not appropriate based on growing up in a highly automated world?

Are they concerned about someone thinking they can’t hack the automated flight regime, can’t push all the buttons correctly? Or maybe they really don’t know how to make the automation do that complex departure?

Are they appropriately suspicious of what the automation is telling them? Do they back up the use of the autopilot with their own on-going assessment?  That’s where experience comes in.  We have a saying when the automation is doing something weird which can be a real trap:  “Why did it do that?  What’s it going to do next?”  I like to have a good plan in mind for what I’m going to do next if the automation doesn't do what I think it should.  Does everyone think this way? If not, why not?

Why do they turn it off early on an approach, when they perhaps should leave it ON?  Most landings I see performed by younger co-pilots are manual from 1000' down to touchdown.  I, on the other hand, mostly let the autopilot fly the airplane down to 200’, THEN I turn it off and replicate how the autopilot was flying, which I watch very carefully, just waiting for it to do something I don’t like so I can take over manually.

We DO have a choice of when to use automation and the key is to use that choice wisely.